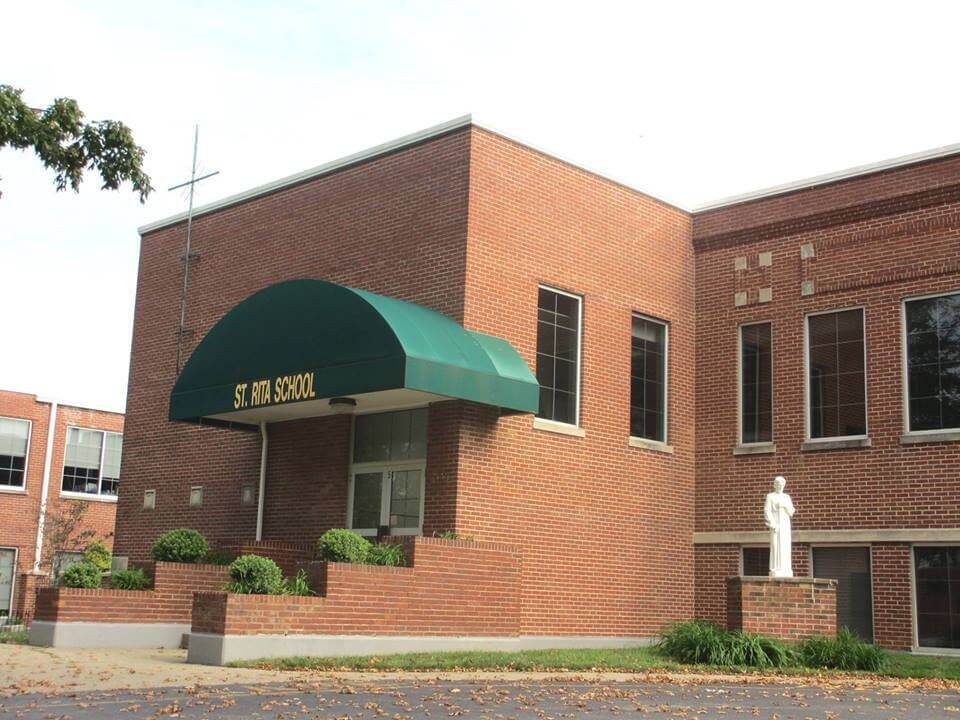 On September 29, 1916, a card party was held at Okolona Hall which netted $75.00. This was to be the beginning of a fund to provide for the construction of a Catholic Church in South Central Jefferson County. Catholic residents in the area felt the time had come to have a parish of their own. In February 1917, a down payment was made on a plot of ground for the new church.

Permission was granted to Rev. Joseph Newman, Pastor of St. Leo the Great Church, to begin the new parish and construction began July 10, 1921. St. Rita was dedicated as a parish church on February 22, 1922, and in August of the same year the first annual picnic was held, netting $2,000. A rectory was built in 1926 and a school in 1928, with an initial enrollment of 78 students. A resident priest was not assigned to the parish until 1936.

Many new homes were built in Okolona following World War II, and so a large addition to the school was blessed in 1950. The cornerstone for the present church was laid in November 1953. The original 40 families had increased to over 900. The parish plant was added to with a gym in 1972. The church has been renovated several times with the most recent renovation being completed in August 2002.

The spirituality of St. Rita parish has been evident in our Faith Community through our religious education programs. We have Religious Education classes for Grades 1-8 Sunday mornings and we have a RCIA team who work together to provide an initiation process for adults seeking to learn about the Catholic faith.

St. Rita School can feel proud of the many achievements and high level of service rendered to the community. Currently 200 students are enrolled in St. Rita School Pre-Kindergarten through 8th grade. Since 1991, school after-care has been offered through the parish. In 2014, the school took over running the school aftercare program.

In 1997, St. Rita added a Spanish Mass to help fill the needs of the increasing number of Hispanic families in the Okolona area. St. Rita current membership numbers 1,100 families.

Between 2014, the school, in conjunction with the partnerships of the Catholic Education Foundation and the Archdiocese of Louisville, set an initiative to increase the Latino student population. Between 2014 and 2015, the Latino population increased in school from 6% to 25%.

In 2014, the school began a major technology initiative to provide for a more robust curriculum that aligned with 21st century learning skills. Part of the initiative was an iPad plan in order to provide our middle grades students (6th, 7th, and 8th) with one to one technology as well as to provide the younger grades with classroom iPad sets. With the generous gifts donated by the St. Rita Booster Club and Catholic Education Foundation, our iPad plan was achieved.